Many think this holiday is called Labor Day but at 26 Degree Brewing Company we call it LaBEER Day! Come Party with us all weekend long as we have 4 days of BEER, FUN and BBQ planned just for you.

>>>> FRIDAY – We are releasing 2 more of our flagship beers in cans today. Come in and grab a 6-pack of TriCounty Lager and Jared’s Batch in their 12oz form, perfect for the beach, pool, and Labeer Day parties. These cans will be available al weekend or until supplies run out.

>>>> SATURDAY – Join us for our Fall Home Brew Tasting Competition with the Hopoholics. – $15 gets you ALL-YOU-CAN-TASTE of these awesome Fall Beer entries.
Check out the special event page for this competition – https://www.facebook.com/events/480263725668026/

>>>> SUNDAY – We have a loaded day for you – Yoga at the Brewery – September 3rd, No Bull Brunch – Sunday, 9/3 at 26° Brewing and we are OPEN LATE so you can maximize your party time this holiday weekend.

>>>> MONDAY – LABEER DAY – Come in and grab a 6-pack of TriCounty Lager and Jared’s Batch in their 12oz form, grab some to-gos and head to the beach, or stay in the cool a/c as we’re throwing a Texas sized party inside the taproom, with traditional Texas style BBQ cuisine from the E & J Texas BBQ, LLC food truck.

If this is not enough Beer, Fun, and BBQ for you… You might not be doing LaBEER Day Weekend right.

It’s the time to Seize the Summer

It’s that time of year when the days are long, the sun is bright and craft beer flows at every BBQ, beach picnic and house party.

To honor this time in our summer, 26 Degree Brewing Company is releasing bottles of “liquid magic”, A.K.A. Citrus A1A, but only in limited quantities.

END_OF_DOCUMENT_TOKEN_TO_BE_REPLACED

We are so very proud to announce that Captain Ron Hefeweizen and IPA1A are now available in six-packed cans to-go in our taproom, starting on March 25, 2017.

On this special release date, we will also be announcing when and where you can buy these six-packs of crafted goodness outside of the brewery.

Join us and the entire 26° family as we celebrate the achievement of making craft beer in our brewery, canning it, and then on to your refrigerator at home. END_OF_DOCUMENT_TOKEN_TO_BE_REPLACED

On some regular basis, 26° Brewing creates a craft beer that we feel is worthy of going home with you in bottle form. We aim to please and that is the mission of our Brown Bag Series.

The Scotch Ness Monster is back for vengeance, with the first Barrel Rage Bottle Release of 2017.

After six months of lurking in the depths of a bourbon barrel, Nessie’s ready to pounce on unsuspecting taste buds. Brewed in the classic U.K. style then aged in the Barrel Rage tradition, this “Wee Heavy” Scotch Ale boasts a full-bodied, rich flavor with subtle hints of caramel, smoky peat, oak, and bourbon for a transcendental expedition into the dark side.

RSVP for this Release

‘Tis the season for exceptional beer, so we’ve brewed up an incredible limited release that’ll knock the pants off Jolly Old Saint Nick.

The first brew in the Brown Bag series, the “I Pee Lager” IPL will debut in extremely limited quantities of individually numbered 22 oz bomber bottles, making the perfect gift for the Craft Beer Connoisseur on your list. In addition to the collector’s bottles, this India Pale Lager will be on tap during the release day event, giving patrons a taste unlike anything else in South Florida.

A perfect brew for the brisk South Florida winter, “I Pee Lager” blends mellow crystal malt flavors with hoppy accents to deliver a complex yet refreshing beer with a bold taste and lager-clean finish.

END_OF_DOCUMENT_TOKEN_TO_BE_REPLACED

It’s been an exciting year of brewing craft beer, and we’re thankful to everyone that’s been a part of it.

To celebrate our first year anniversary, everyone’s invited to the One Year of Craft Beer Anniversary Party on Saturday, September 24th at the 26° Brewery taproom in Pompano Beach.

RSVP for the PARTY!

Who: 26° Brewing, food trucks from Tucker Duke’s, E & J Barbecue, and Rolling Chefs, and our beer brewing brethren, including:

END_OF_DOCUMENT_TOKEN_TO_BE_REPLACED

Pumpkin-beer season is here and the seasonal releases are starting to pour in.  Read this excerpt from SouthFlorida.com as it quotes 26°’s own, Greg Lieberman.

…In September, breweries such as 26 Degree in Pompano Beach, Devour in Boynton Beach and J. Wakefield in Wynwood will follow Bangin’ Banjo by staging release parties in their taprooms. Drinkers can already buy cans of Due South Brewing’s Isle of MaGourdo, a spicy pumpkin amber ale, in stores….

Not Another F’n Pumpkin Porter, …will debut in the taproom on Labor Day.

It will be served in a snifter rimmed with cinnamon sugar.

Lieberman is only brewing a small batch of Not Another F’n — about 500 gallons — which is just enough to satisfy the brewery’s thirsty pumpkin heads. But raw pumpkin can cause problems for brewing systems, he says.

“From a brewer’s side, nobody likes working with pumpkin, because pumpkin gets so gummy in the tank,” says Lieberman, who doesn’t “really migrate to pumpkin beer.” “It’s tough to work with and tough to clean. And you don’t want to make too much of it because demand plummets by November.”… 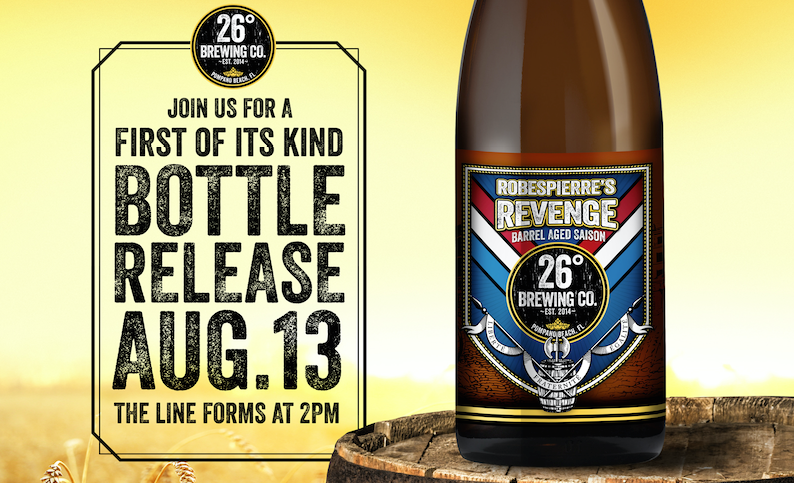 Known as “The Incorruptible”, Maximilien dedicated his life as a French civil servant to weed-out corrupt politicians all while expressing strong abolitionist views. His outspoken ways eventually led to his demise via guillotine…but he stayed loyal to his allies and virtues until the end.

Who: All Craft Beer Drinkers, Connoisseurs, Collectors, Those in the Know

END_OF_DOCUMENT_TOKEN_TO_BE_REPLACED

We love beer, you love beer.
We want to hear what you have to say.

Use the form to the right to share your thoughts, make some requests or inquire on anything your hearts desire.

When we're done making this next batch of brew, we'll check our email and get right back with you.